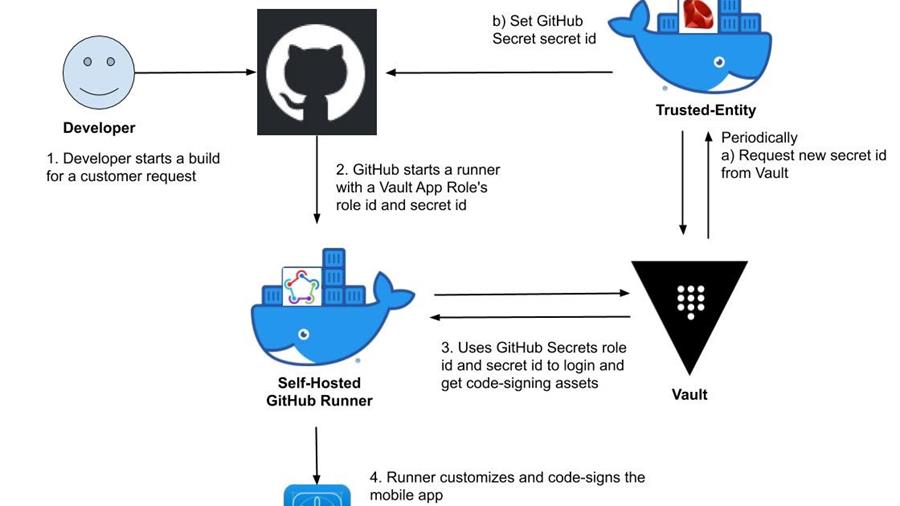 As I wrote in “Bring Customers Joy With Automation,” Appian builds custom versions of its mobile application for its customers. To do this, we offer customers the option to send us their code-signing credentials which we secure in Vault, as I described in the article, “Automate Securing Code-Signing Assets.”

As I described in the previous article, “Customizing and Code Signing An Existing Mobile App”, our build system can now code-sign mobile builds without us ever seeing the passwords, but we still have to manually get a Vault token and give it to the build system. That is a small burden on us and an unnecessary delay for the customer. It would be much better if our build system could do the whole thing by itself.

First, let’s revisit where we left off — we added fastlane code to our build system that customizes and code-signs an existing application. When the customer wants a build, an Engineering employee has to create a Vault token that only the build system can use to get the code-signing assets. The employee would provide that token to a Jenkins job, which would then run the fastlane code to fetch the Appian mobile application, customize it with the customer’s assets, and then use the Vault token to fetch the code-signing assets to sign the mobile app as the customer.

This is where the Vault App Role comes into play. It allows each build machine to authenticate to Vault in a way that restricts it to its attached policy. It does this by logging in to Vault with a “role id” and a “secret id” — think of the “role id” as the username and the “secret id” as the password. By tying the role id to a predefined role, we can define what this “role” can do. In this case, it can “read” a very small set of secrets only on a set of machines in a specific network subnet.

We can improve this process by creating a Trusted Entity server that will periodically change the secret id. This reduces the impact if a malicious actor ever copies the secret id.

To demonstrate how to do this, we’ll use the Vault instance that we set up in “Automate Securing Code-Signing Assets” to create:

Note: I am using GitHub Actions rather than Jenkins to demonstrate the CI/CD as it is easier to share the code with you and should be simple to replicate if you want to experiment with this yourself.

First, we have to enable the Vault App Role as an auth backend. Assuming that you have run through the “Automate Securing Code Signing Assets” article, navigate to the same directory that the docker-compose.yaml file is in and run:

Next, we have to create the actual App Role. In this case, I’m going to use an explicit name that is hard to mistake for anything else: custom-mobile-apps-signer.

Let’s walk through what is going on here:

Now that we have the App Role created, we need to do something with it — we need its role id that I mentioned before and put it in a place where only our GitHub Actions Runner can use it.

GitHub Actions allow developers to integrate Continuous Integration and Deployment options directly within the GitHub environment instead of connecting third-party systems such as Jenkins or CircleCI. In a way, I consider GitHub Actions to be a response to GitLab’s integrated CI/CD offering.

I will assume that you have some familiarity with GitHub Actions. If not, check out this article, “An Introduction to GitHub Actions.” For our purposes, we’ll connect a GitHub Action to the fastlane code from “Customizing and Code Signing An Existing Mobile App.” This action will run a GitHub Runner that has access to the Vault App Role’s role id and secret id via GitHub Secrets.

Let’s set up those secrets. We want to do this such that a program can automatically update the GitHub Secrets. To do so, we need to create a GitHub Personal Access Token with these permissions. Follow the GitHub instructions to create the GitHub token. If this is for a public repo (which mine is), select the public_repo checkbox — otherwise, select the top repo checkbox.

Give that GitHub token a name (I named mine “Update Public Repo Secret”) and save it locally. I saved it as a file, update-public-repos-token.txt, in the same directory as my Vault example. I added it to the .gitignore file so that I don’t accidentally submit it to GitHub and give you the power to change my public repo 😉.

Now that we have a GitHub token that will allow us to write secrets, we need to actually create them. At this point, we have enabled App Roles and have the policy attached to a role that allows it to get the secrets to code-sign a mobile build.

We now have the role id and need to put it in a GitHub Secret. Using the GitHub Secrets API documentation, I created a Ruby script to do that using the GitHub token that we created above in the directory, update_custom_mobile_apps_secret_id (you’ll want to change the repo path to one of your GitHub repos):

This script encrypts the secret_value with the public key for the repo and then sends it to the endpoint for the given secret_key. We can run it like this:

Next, we need to give our GitHub Action runner the secret id so that it can log in. We don’t want a static long-lived password just in case someone gets a hold of it and causes mayhem over a long period of time. Instead, we want to periodically change, or “rotate”, that password. To do so, we need to create what Hashicorp calls a Trusted Entity. It will have the ability to create a new secret id on a schedule and write it to a GitHub Secret.

For this example, I’ll use a docker container to simulate an independent instance, but in the real world you will want to use a computer that is behind a Virtual Private Network (VPN) alongside the Vault server. Theoretically, the runner should also run in this VPN and only be open to an internal CI/CD system rather than a GitHub public repository (although you could do this with restricted CIDRs).

Let’s look at code that the Trusted Entity will run and then build the Docker container that will run it. In the same directory that you put the update_github_secret_value.rb file in, create the following files:

This application is simply an infinite loop that creates a new Vault App Role secret id every 45 minutes and sets the GitHub Secret for it using the script we created earlier.

Next, create the Dockerfile that we will use to build and run the above ruby script:

This Dockerfile hard-codes VAULT_ADDR to be the IP Address of the Vault server in the Docker container’s network, installs the libraries needed to encrypt the GitHub Secret, and finally copies the Ruby Gemfile and update_custom_mobile_apps_secret_id.rb script into the container.

Here is the Gemfile that accompanies it:

Now that we have the Dockerfile set up along with the accompanying Gemfile, let’s build it and spin it up so that it can periodically update the GitHub Secret VAULT_CODESIGNING_SECRET_ID.

In the directory update_custom_mobile_apps_secret_id, where the Dockerfile is, run:

Now that we have built the image, we have to run the Trusted Entity in the same network as the Vault server so that it can communicate over that network. Let’s get the network:

Now that we have the network, let’s spin up the Trusted Entity docker container in that network:

With the Trusted Entity running, it is time to create a GitHub Actions workflow that can execute a runner with access to Vault and the secrets. Following the GitHub Actions documentation, let’s create such a workflow:

We have configured this workflow to run when someone pushes to master for convenience; normally, I would have this workflow run only when someone merges to master to ensure security and correctness. The workflow runs the job build, which executes the customize_build_app fastlane to customize and code-sign the application. It code-signs with credentials pulled from Vault using the GitHub Secrets VAULT_CODESIGNING_ROLE_ID and VAULT_CODESIGNING_SECRET_ID authenticate.

The only thing missing now is the actual GitHub runner. Let’s set that up by following Github’s instructions: Adding self-hosted runners. Pay attention to the warning as you don’t want bad code running on your machine — as this is an example, I monitor the runner’s logs and shut down this action when not using it, so I think I’m okay.

Push this up to your branch and then you’ll have your build. Let’s run this manually by navigating to the Actions tab, selecting the build workflow, and then clicking the “Run workflow” button.

This will start the GitHub runner. It will use the GitHub Secrets to log into Vault, get the code-signing assets, build the iOS application, and sign it with the credentials.

So there you have it. I’ve walked you through how you can set up your own Vault App Roles with credentials that are rotated by a Trusted Entity with GitHub Secrets. A GitHub Action runner uses these Secrets to customize and code-sign different configurations of a mobile application. If you would like to see all the code together, checkout the Github repo lyndsey-ferguson/article-example-vault-approles.

Keep in mind that we’re not done yet, as our Appian Engineer still has to kick off the build. In later articles, I’ll describe how we can make this a self-service system that the customer can do themselves.

Keep an eye out for future articles, and I hope that you enjoyed this one! If you have any questions, please feel free to ask in the Comments section below. If you find this kind of work interesting and want to work with creative, passionate, and smart people, there are plenty of other projects to work on like this at Appian. Apply today!